Edward Murphy was born in Ireland around 1811.  He married Martha Quinn and moved to Wales where they had five children: Sarah, William, Mary, Edward, and Martha. The family moved around Wales for the next twenty years in the areas of Monmouthshire and Glamorgan; their movements and locations were closely tied the rise and fall of various iron works in the region.  In 1861, the Murphy family was living in Durham, England and working at the Witton Park Ironworks, about 300 miles north of their last residence in Wales.

William and Catherine’s son, James Joseph Murphy was born around 1876 in Witton, Durham, England.  He came with his family to Pennsylvania when he was 16 years old.

1. Margaret Ann Richards was born in Middlesbrough, Yorkshire North Riding, England on 2 April 1880 to John Richards of England and Ann Williams of Wales. Family lore says Margaret and her older sister Bessie came to America with a step-mother named Elizabeth.  (I believe Margaret and Bessie had three older siblings: Polly, Joseph, and Elizabeth that may have stayed in England)  They settled in Mercer County, Pennsylvania with their father John. Not much is known about Margaret and Bessie’s mother Ann Williams. On September 1908, Margaret’s father, John Richards was struck and killed by a B&O Flyer (train) in Youngstown, Ohio and was buried in Potter’s Field at Oak Hill Cemetery before the family could identify him.  He had been traveling from Youngstown to Greenville, Pennsylvania to visit his daughter Bessie.  Unable to exhume and bury her father in the family plot in Mercer County, Pennsylvania due to the expensive cost, Margaret arranged a special service at his grave. 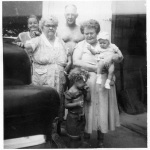 Charles and Pearl Wigton appear many times in the New Castle News Society section during the 1930’s and 1950’s as attending picnics, visiting family members (especially brother J. Albert Wigton), and attending church functions. Pearl and Charles did not have any children.

1.2. Katherine Murphy was born 15 May 1904 in Mercer County, Pennsylvania. She was married to Leo Arnaut and died at the young age of 29 on 11 October 1933 of peritonitis and pneumonia. Katherine is buried at Calvary Cemetery in Youngstown. Leo Arnaut was born 14 January 1898 in Borgone Susa, Italy (formerly Savoy, France) to Venanzio Arnaut and Elvira Marie Falco, both of France. Leo Arnaut died 23 July 1963. Katherine and Leo Arnaut had three children:

1.2.1. Margaret Arnaut was born 7 December 1921 in Youngstown, Ohio and passed away on 20 June 2014 at the age of 92.  She married Owen W Gallaugher on 4 July 1941 in Columbiana, Ohio.  Owen was was born 26 November 1922 in Cleveland, Ohio and passed away 29 April 1995.  He served in the Marine Corps during WW2.  Margaret was nicknamed “Pudgey” at a young age, and that nickname (also “Pudge”) stuck with her throughout life, although I don’t think she was too crazy about it.  Margaret played basketball in an organized women’s league in her younger adult years and later was involved in many bowling leagues, having bowled a 300 score many times.  Margaret and Owen had two children:

1.2.2. William James Arnaut was born 30 July 1923 in Youngstown, Ohio and died 28 March 1995 in the same city. He served in the U.S. Army during World War II alongside his twin brother Leo. Both brothers received Purple Hearts for wounds received at St. Lo on June 6, 1944 in the D-Day Landings. William married Ruth Louise Haney on 10 September 1949 in Youngstown, Ohio. Ruth was born 17 July 1924 to Terrance Andrew Haney and Mary Ann Seger, both of New Castle, Pennsylvania. She passed away on 6 October 2011.  Ruth and William had six children:

1.3. Elizabeth Murphy was born 30 December 1905 in Mercer County, Pennsylvania. Elizabeth was intended to marry Charles Robert Duncan, as they were expecting a child. Charles was born 6 October 1901 to Charles A Duncan and Margaret A Rostrom. Elizabeth and Charles never married and Elizabeth gave birth to Katherine Irene Murphy as a single mother. Charles married many years later to Julia M Young and died 18 August 1984.  He is interned at Crown Hill Burial Park in Trumbull, Ohio.  Ike McGinty was the loyal companion of Elizabeth Murphy for over 40 years.  She was known to her grandchildren as “Nana.”  She died 21 April 1989 in Youngstown, Ohio and is buried at Calvary Cemetery.

1.3.1.3. Barbara Lynn Updegraff married to Hans Pirolt and lives in Georgia.  Barbara and Hans have one daughter:

1.3.1.4. Daniel Charles Updegraff lives in Northern Ireland.
1.3.1.5. Richard Jay Updegraff born 18 February 1957 in Youngstown and died 26 December 2015 in Rathdrum, Idaho.  Richy loved to surf and listen to David Bowie and Queen.  He was a tinkerer and could fix anything.  He worked in Alaska on the North Slope for five years before moving to Idaho where he started his own painting business.
1.3.1.6. Russell Alan Updegraff lives in California.

Betsy was the daughter of John Spafford Garthwaite of Newcastle, Staffordshire, England and Bridget Agnes “Bessie” Moran of Cork, Ireland.  John Garthwaite immigrated to America in April 1911 at the age of 19 with his mother Eliza and younger sisters Annie and Emma.  The family travelled aboard the ship Franconia from Liverpool, England to Boston, Massachusetts.  Bessie Moran was the daughter of Thomas Moran and Catherine Brown.  She immigrated to America in 1913. John Garthwaite and Bessie Moran were married 22 August 1914 in Mahoning County, Ohio.  Their daughter Elizabeth Ann “Betsy” Garthwaite was born 10 April 1915 in Youngstown, Ohio and died 12 February 2004 in Hubbard, Ohio. Betsy and James had four children:

1.4.1. Delores Jean Murphy was born 4 March 1933 and died of cancer on 28 December 1996 in Youngstown, Ohio. She loved playing Bingo and the beaches at Wildwood, New Jersey.  Dolores married Randall A “Duke” Wellington on 5 September 1959.  Duke has served for the last 43 years with the Youngstown Police Department.

1.4.3. James Edward “Jimmy” Murphy was born 20 July 1936 in Youngstown, Ohio and died 21 May 2009 in Hubbard, Ohio. On 20 April 1956 James married Virginia R Mauerman, daughter of Henry Mauerman and Elizabeth Roberts.  Virginia was born 23 October 1937. James is buried at Hubbard Union Cemetery in Ohio.  James and Virginia had the following children:

1.4.4.1.  Donald Murphy is married to Andrea Murphy and lives in Ohio.

1.5. Edward Murphy was born 23 June 1910 and died of cancer on 15 October 1992, having lived in Youngstown, Ohio his entire life. Edward was a foreman at Wean United and retired in 1972.  He was a member of the Saint Christine Church and the United Engineering Golf League.  He married Mildred Whitacre on 1 March 1930, daughter of Stephen Whitacre and Mary Nalley.  Mildred was born 19 March 1910 in Dayton, Ohio and died 16 November 1980 of a heart attack.  Edward and Mildred had five children:

1.5.3. Donald Raymond Murphy was born 15 June 1936 in Youngstown, Ohio and died 30 October 1992 of a heart ailment in Norwood, North Carolina.  Donald was a Warrant Officer in the United States Army and served twice in Vietnam.  He was married to Maurgarette Roberts and had two daughters. Donald is buried at Salisbury National Cemetery in North Carolina.

1.5.4. William Murphy was born 3 December 1937 in Youngstown, Ohio and died 9 January 2000 in Altus, Oklahoma. He married Gereta “Geet” Shipley 12 November 1956 and was a veteran of the United States Air Force having served in Vietnam. After retirement from the military, William became the circulation manager at the Altus Times (Oklahoma) and worked there 18 years until retirement. His hobbies included umpiring little league, playing pool, shuffleboard, yard work, and spending time with his grandchildren. William and Gereta Murphy had four children: