Alexander Campbell Hutchinson was born 24 April 1858 in Oakland Township, Pennsylvania to Ann Marie Jamison and William T Hutchison. “Cam” was the middle child of nine and and as a small boy they lived next door to his grandparents, two aunts and uncles, and nine cousins.  I imagine many large family gatherings during his childhood. 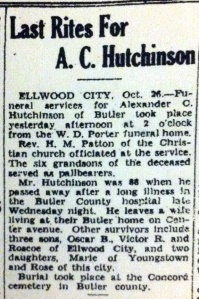 After the divorce, Cam continued to live in Butler and worked at a local car shop with his neighbor.  Loretta moved to Ellwood City and lived with her daughter and grand daughters.  The divorce may have been taboo for the family, because Cam’s obituary states that “he leaves a wife living at their Butler home.”

The 1940 census lists Cam living in the Butler County Home.  Later that year, on 23 October 1940 at the age of 80, Cam passed away. He had been suffering from chronic endocarditis and chest pains.

Cam outlived all of his eight siblings by at least 24 years.